A Visit To Sissinghurst Castle Garden 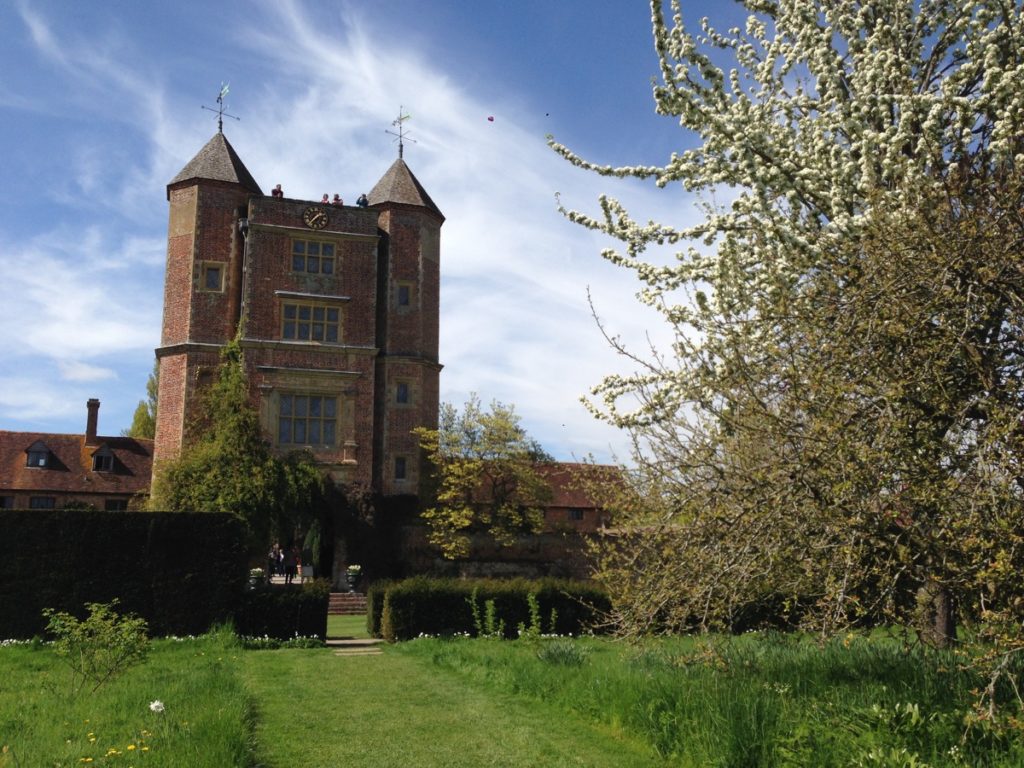 This Easter, I finally visited Sissinghurst Castle Garden in Kent, somewhere I’ve been longing to visit. All in all, the garden is wonderful, a pleasure to walk around, with beautifully planted borders, and lots of unusual, well-labelled plants to interest plant geeks like me. It’s broken up into a series of garden rooms, surrounding a stunning, turreted, Tudor tower. Closely-clipped yew hedges form long corridors that exaggerate perspective, and offer glimpses through to rooms that open out beyond narrow doorways.

Most of the planting will be at its best in summer, but even at this time of year there were some beautiful sights and plant combinations. Hyacinths and narcissi filled the air with rich perfume, where they bordered perfectly, criss-crossed mown lawns in the walled gardens around the house. In the pleached lime walk, shadows patterned the path, and a multitude of spring bulbs and perennial flowers tumbled and tangled over each other, in a kaleidoscope of colour and form. It really was delightful.

The writer, Vita Sackville-West, and her husband, Harold Nicolson, created the garden in the 1930s, and it is now maintained by the National Trust. And it is all terribly National Trust. The ice creams in the café are local and organic, of course. The signage around the garden is in white chalk pen on real slates, and there are quotations by Vita in classy black serif font displayed here and there. There are no dogs or buggies allowed in the garden. Even the disabled parking signs are so subtle and tasteful that you could be forgiven for missing them.

“You dreamed us, and we made your dream come true.

We are your vision, here made manifest.

You sowed us, and obediently we grew,

But, sowing us, you sowed more than you knew

And something not ourselves has done the rest.”

The site was once a Saxon pig farm, originally called ‘Saxenhurst’, with ‘hurst’ meaning woodland. Later, in the 18th-century, its tudor buildings became a prison for French sailors captured by the British during the Seven Years War. They called it ‘le chateaux’, which led to ‘castle’ being added to its name. In the 19th-century, it was used as a poor house for the able-bodied. When Vita and Harold bought Sissinghurst Castle in 1930, it had become a working farm, growing cereals, and with established orchards and hop gardens.

Sissinghurst is loved by many who consider it the paradigm 20th-century romantic English country garden. But it is also criticised by some gardeners. The critics argue that Sissinghurst has become a garden frozen in time, that the planting combinations are safe and boring, that it is too stuffy and tidy. They say that important gardens should move with the times, not remain museum pieces.

I’m not sure I agree. It’s fascinating to be able to visit a piece of gardening history, to see a period English garden in the flesh. Ultimately, that’s what the National Trust is all about, preserving history. And if you want to see something new and fresh, there are many other, fabulous gardens where the head gardeners are not afraid to try new things and break the mould.

“One has a lot, an endless lot, to learn when one sets out to be a gardener.”

The white garden is Sissinghurst’s most famous garden room. It’s not looking great at this time of year, but I’m sure it will be rather wonderful in a few months. The colour scheme is all whites, silvers and greens, a welcome change, after walking through the garden’s other much more colourful spaces. It’s a pleasantly calm space, which has helped me to better appreciate the whites in my garden. I’ve always found white a rather difficult colour to incorporate into my designs, but used tonally, it’s much less glaring. If you’d like to recreate a piece of Sissinghurst’s white garden at home, try these plants in a border:

I’ll leave you with my favourite of Vita’s quotes from the garden, printed on the curved wall of the tower’s spiral staircase, which, while not seasonally appropriate, perfectly evokes the feeling of walking under trees in autumn.

“The small but intense pleasure of walking through dry leaves and kicking them up as you go… they rustle, they brustle, they crackle…”

← G is for Gladioli :: A to Z of Gardening
Things To Do In A Weekend :: Build A Stumpery →

4 comments for “A Visit To Sissinghurst Castle Garden”

There are still a few places left on the 'Introduc

I often use highlighters to draw a grid when first

How to prune your cornus (dogwoods): be brutal!! #

View from my desk this morning. #plantingdesign #g

Snow on the crab apple. Have I mentioned before th

Detail from a walled garden design that I’ll be

Merry Christmas all! I’m as stuffed as a turkey

And breathe... I’ve finished work for this year.

These cardoon seed heads have germinated all by th

Time for bed my pretties. #springbulbs #alliums #a