Things To Do In A Weekend :: Build A Stumpery

Around this time last year, I planted up one of my first professional garden designs. It was a stumpery, built on an existing mound of earth in the north-facing corner of a garden in Norwich. The stumpery frames a pond, with a steep cascade and bog garden. Steps, made from old logs and stepping stones, take you up and over it, so you can get up close to the plants and view the pond and little stream from above.

It’s a lovely thing, creating a design, helping to build and plant it, and then being able to visit again, every few months, to see how the plants have settled in and grown. It’s a process that can take months, and even years before the design is fully mature. The photos below were taken before construction, and six months after planting. 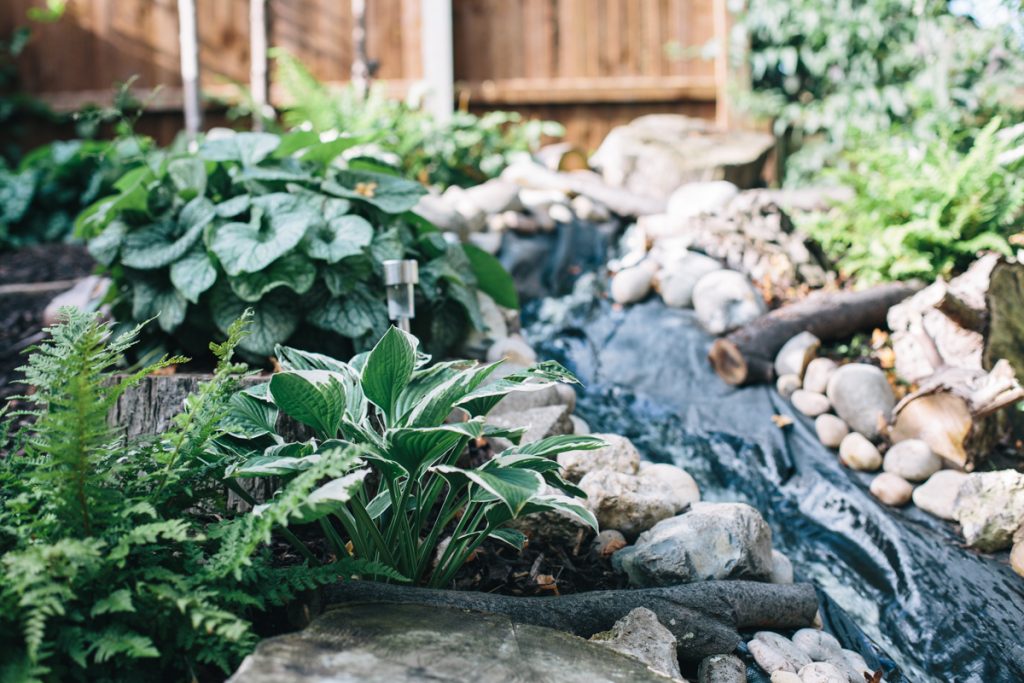 This week, I was back in the same garden, to plant up a new border design, and I had the chance to see the stumpery in all its spring glory. I felt very proud and gratified. The garden’s owners are delighted with it, having done much of the hard graft themselves, including constructing the pond and cascade, and clearing all of the grass and weeds.

The plants were selected to be attractive to wildlife. The bees were buzzing loudly among the pulmonaria flowers, and those, together with blue brunnera, and the nodding heads of creamy-yellow epimediums, have created a pretty haze of flowers above the pond. Pale green and white hosta shoots are just starting to pop up above the bark mulch, and native primulas, blue anemones, chamomile and wild violets cover the ground.

In the pond, the marsh marigold is loaded with shiny, buttery-yellow flowers, and the water forget-me-not is flourishing in the bog garden. Soon, the irises will be flowering, but for now their silvery spears provide attractive height and interest. The icing on the cake for me, was hearing that newts have moved into the pond, and also that the owners’ grandchildren love it and like climbing up the path through the stumpery.

A new pergola, which faces the pond, will be planted with climbers soon – a wisteria and a viticella clematis. I think it’s going to be a wonderful place to sit and watch the wildlife in the early morning or late afternoon. Even better with a cup of coffee, or glass of wine!

A year on from that design being installed, I have finally built my own mini stumpery. I was fortunate to acquire five large stumps, complete with roots, from a friend recently. He was delivering a load of compost onto my driveway when I noticed the stumps at the front of the trailer. It’s always worth asking, I always think, and it turned out that he was about to take them to the tip. I do love a freebie.

“A stumpery is a garden feature similar to a rockery but made from parts of dead trees. This can take the form of whole stumps, logs, pieces of bark or even worked timber such as railway sleepers or floorboards. The pieces are arranged artistically and plants, typically ferns, mosses and lichens are encouraged to grow around or on them. They provide a feature for the garden and a habitat for several types of wildlife.” – Wikipedia

I’ve sited the stumpery in my front garden, in a fairly dry, east-facing border, under a cherry tree. The stumps have been dug in, so they’re secure and won’t rock or shift, and positioned as a group, leaning or resting on each other, with the root ends showing. This has created a number of crevices and gaps between the stumps, where I’ve put plants that would traditionally be grown in a stumpery, including various ferns and brunneras, and a few cyclamen. These plants came from my mum’s garden, where we hunted out self-seeded plants that wouldn’t be missed there. (Thanks Mum!)

The border already has other shade-loving plants that work well in a stumpery, such as primroses, bluebells and geraniums. When I have a bit of money – because this whole project has been done with a budget of zero pounds – I’m going to add some epimediums. And in autumn, I’m planning to plant spring-flowering, woodland bulbs around the stumps, including dog’s tooth violets (Erythroniums) and wood anemones (Anemone nemorosa).

My stumpery was created on Sunday afternoon, with some help from my husband, and is definitely a project that you could create in your own garden in a weekend. If you have a stumpery, or are thinking of building one get in touch! You can comment below, or on my Facebook page. I’d love to hear about it. xx 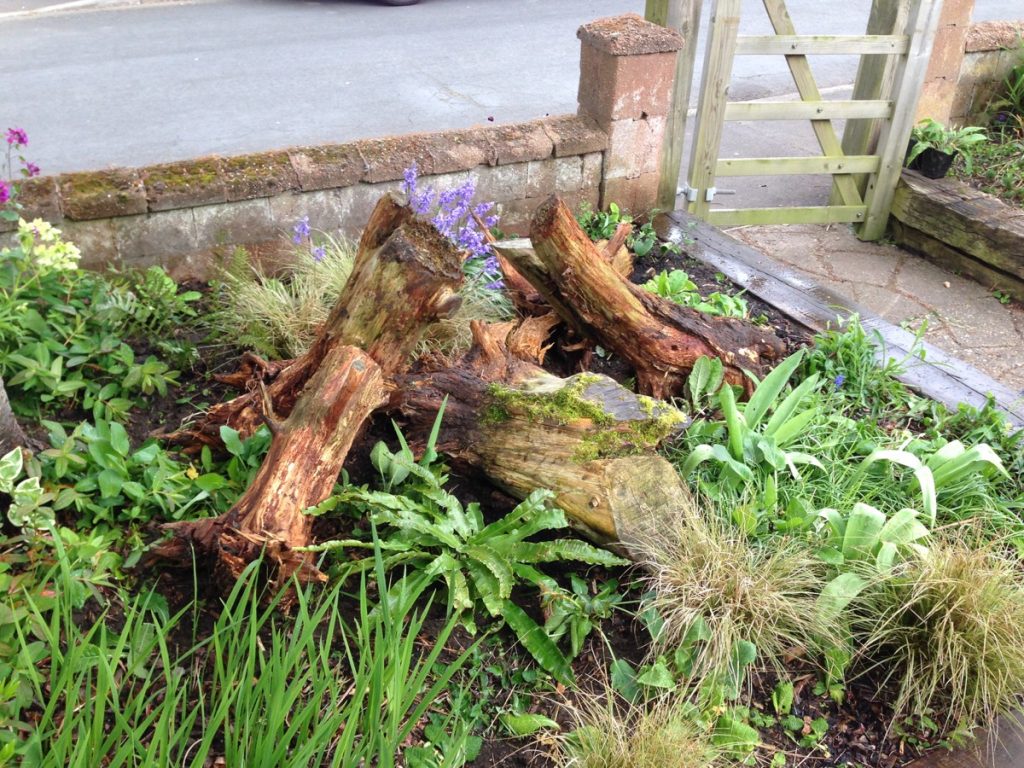 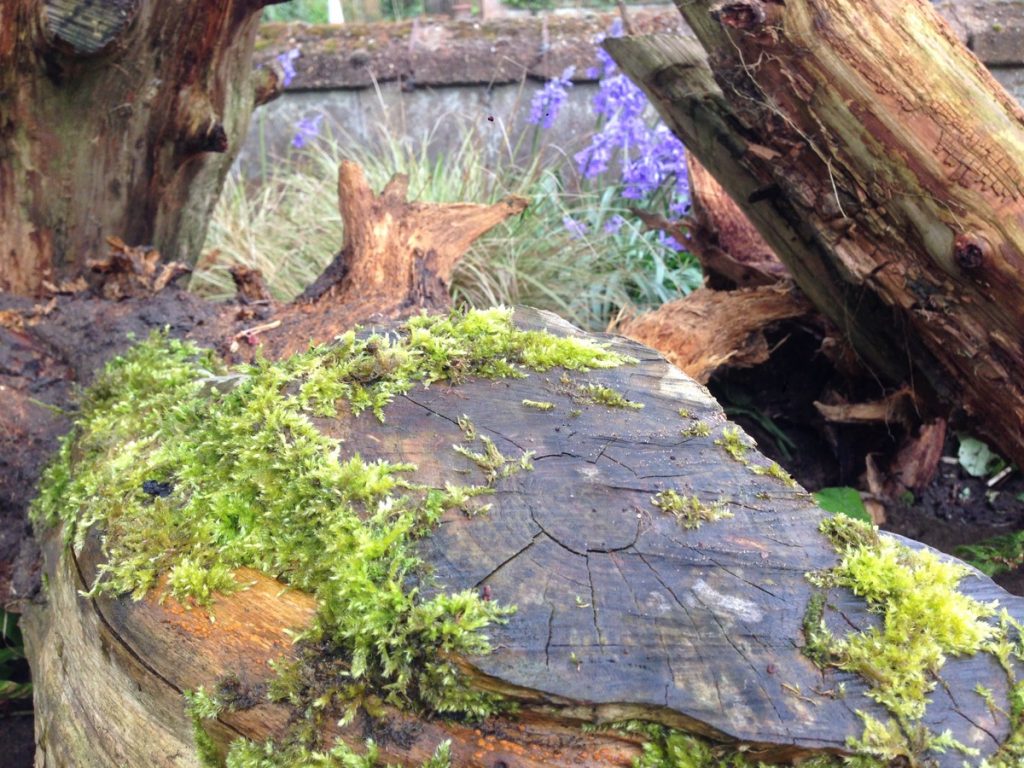 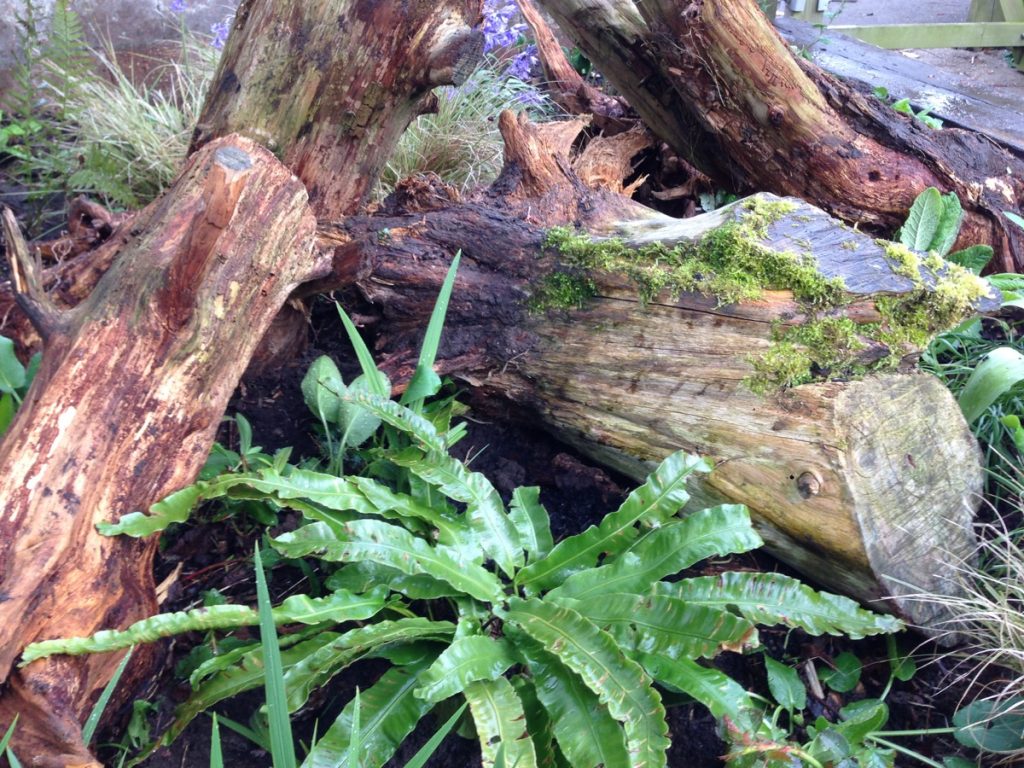 ← A Visit To Sissinghurst Castle Garden
Finding Time To Do Nothing →

6 comments for “Things To Do In A Weekend :: Build A Stumpery”

Close up view of the elevation. It really helps cl

Such a perfect balance between formality and infor

Purple accents from the Cotinus, Fagus and Dahlias

I dream of owning a walled garden some day 🥰 @h

Just back from a fabulous visit to @holmehalehallg

I was delighted to see that there is still so much

Perfect combination for autumn colour. This is Ver

Recent pics sent by my lovely clients. Swipe to se

Glorious sunshine in my garden today, and the Stip

Sensational dahlias, with a backdrop of Musa basjo

This garden always delivers, and there’s so much

Also on the drawing board today is this small city

#sketchview of a new #gardendesign which will be f

Mystery dahlia. Should have been ‘Purple Gem’.