In the last week of the summer holidays, we booked a last minute, cheap-as-chips, static caravan, and headed up to the north Norfolk cost for a few days. It was, as always, heavenly up there! We had ice cream every day, ate fish finger sandwiches on the beach, went rock-pooling and fossil hunting, and generally had a jolly British beach holiday. I even managed to get in a garden visit to a place I’ve been wanting to go to for ages – Felbrigg Hall.

Felbrigg Hall is a National Trust property, so you can expect all the usual trimmings that that entails – cream teas, a lovely gift shop, extremely helpful and friendly staff and volunteers, a stunning historic building, stuff to keep the kids entertained, and well-tended gardens. The gardens, obviously, were the reason I wanted to visit.

Our first stop was the walled garden, which is set slightly apart from the hall and park. Unlike other parts of site, there are no dogs allowed in the walled garden, which is worth bearing in mind if you’re planning to visit. Oh, how I do love a walled garden! They are places where horticultural dreams come true. There are plants in Felbrigg’s walled garden that I have never seen before. It’s full of strange and wonderful exotics and rarities, and certainly scores highly with the plant geek in me. Somewhat tender plants survive so well here because the high walls create a micro climate, keeping the garden a significant number of degrees warmer than the world outside the walls, all year round.

Almost every wall was covered in greenery – espallier and fan-trained fruit trees, climbers like Passiflora (passionfruit) and Akebia quinata (Chocolate vine). There were seemingly endless herbaceous borders, positively heaving with Dahlias and Salvias and grasses, and backdrop of palms and unusual flowering shrubs, many of which I didn’t recognise.

A sensational gravel garden, filled with sedums, aeoniums, agaves, giant yuccas and cordylines, seemed positively other-worldly when approached via a peaceful avenue of Olive trees, in front of old walls covered in climbing Hydrangeas. Tucked away in a corner, past the gravel garden, is a quiet picnic area, which has a natural play ground for children, with willow tunnels and teepees and a great den building space.

A stunning tree caught my eye, one that I’ve never even heard of before: Ablizia julibrissin. The light green foliage is so delicate, and the fluffy pink flowers were glowing in the sunlight. I had a fun chat with a couple who were looking for a tree for their garden, and were hoping this might be the one for them. Having done a bit of reading up about this tree since, I’ve learned that it’s a variety of Mimosa, commonly known as The Silk Tree, not because it has anything to do with silk production, but presumably because the flowers look so silky. The RHS rate its hardiness at H4, so if it’s a bit too tender for where you live, you could try another Mimosa variety, Acacia dealbata (H3). 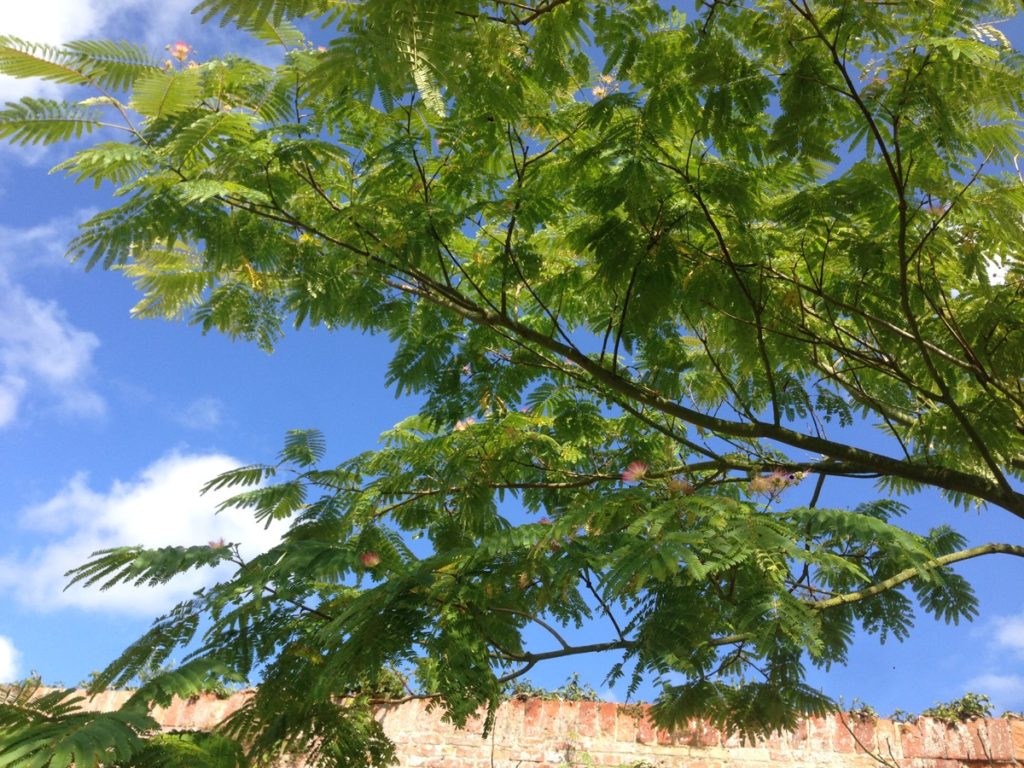 The kitchen garden was more beautiful than many purely ornamental gardens, with strange shaped gourds and squashes, pumpkins, and fluffy amaranth flowers, growing alongside more normal fruit and veg plants. In amongst all this, were huge, brightly coloured Cannas, purple-leafed Bananas, and more Dahlias. It was quite overwhelming, in a fantastic way. I wish I’d taken more photos so I could remember them all!

The old wooden glasshouses in this part of the garden hold a collection of succulents and tender plants. There is a formal pond full of fish and water lilies. A towering dovecote (picture at the top) is home to some very pretty white doves. Beyond the kitchen garden is an orchard, with wild flowers all around, humming with bees from a collection of hives. Oh, and I forgot about the chickens! There were chickens pootling about all over the garden.

All of these treasures are contained within the walled garden, which is just one part of the park and gardens at Felbrigg. You can also visit the old Orangerie, home to Citrus trees and some very mature Camellias. The newly restored Rose Garden next to hall itself is pretty but small. The West Garden, with its shrubberies* and specimen trees from North America including Red Oaks and Western Red Cedars, is a great place for a game of hide and seek, and clambering over old logs and stumps. I dare you not to hug a tree there!

(*’Shrubbery’ and ‘Shruberries’ should be pronounced in the style of The Knights Who Say ‘Ni’ in Monty Python And The Holy Grail. Alternative pronunciation in the lisping style of Michael Palin as Pontius Pilate in Monty Python’s Life of Brian is also acceptable.)

I haven’t even yet mentioned the lovely hall, which is an interesting place to explore. I especially liked the gothic library, and 15th century stained glass. The estate itself has trails through acres of parkland and woods, as well as a lake and a 14th century church. Anyone interested in the history of British Gardens and the English Landscape Movement might be interested to know that Humphrey Repton worked at Felbrigg for some time.

“There is no paper evidence of Repton ever having completed design work at Felbrigg but we do know that significant landscaping, ‘Reptonian’ in character, was carried out on the estate during Repton’s time.”

All in all, Felbrigg Hall is a wonderful day out and seems to have something for everyone. Do visit if you ever have the opportunity.

My mum’s garden that I designed and planted a fe

I’m giving myself a whole day gardening in MY ga

New design for the garden of a very pretty old mil

More recent pics of the walled garden sent by my c

I do love it when clients send me pics of gardens

A new Acer for my collection. This is Acer palmatu

I love that moment before bud burst. This is one o

I cheated and kept this pot of tulips going for a

Pics from my front garden beds. Honesty and red tu

I’m doing an AMA on my stories today, so hit me

Pics of my sisters garden that we designed togethe

A few delights in my garden today: Akebia quinata

Sometimes a simple rethink is all that’s require