Earlier this week, on the spur of the moment, I decided to finally visit The Urban Jungle for lunch and a bit of shopping. I’d heard about it from a few friends, and it didn’t disappoint. It’s an incredible place. Tucked away down a little lane in Costessey, just outside Norwich, it’s a tropical haven away from the noise of the city. You would be forgiven for thinking you were in the tropics somewhere, especially if you visit on a hot sunny day, like we did. It reminded me a little of Nairobi, with lots of lush growth and deep shade cast by tall trees like eucalyptus, pines and palms.

We were greeted by this sign when we arrived, along with the sight of two small dogs hanging around the place. I’m not sure which was Lunar (the dog). I would have enjoyed being presented with a pine cone, and the dilemma of whether to accept it, but sadly we were not offered one.

We pootled through countless rows of plants, which included all sorts of impressive exotics, such as cannas, bamboos, gunnera (top photo), bottle brushes, bougainvillea, papaya trees, aeoniums, and many more! I had been told they have a great cafe, which we found inside one of the many large greenhouses. You can stand on the bridge and watch the giant fish, sit among the plants and enjoy toasties, smoothies, cake and coffee. I highly recommend it. On a chilly day, I imagine it would be quite a cosy treat to hide away in there for lunch or afternoon tea. 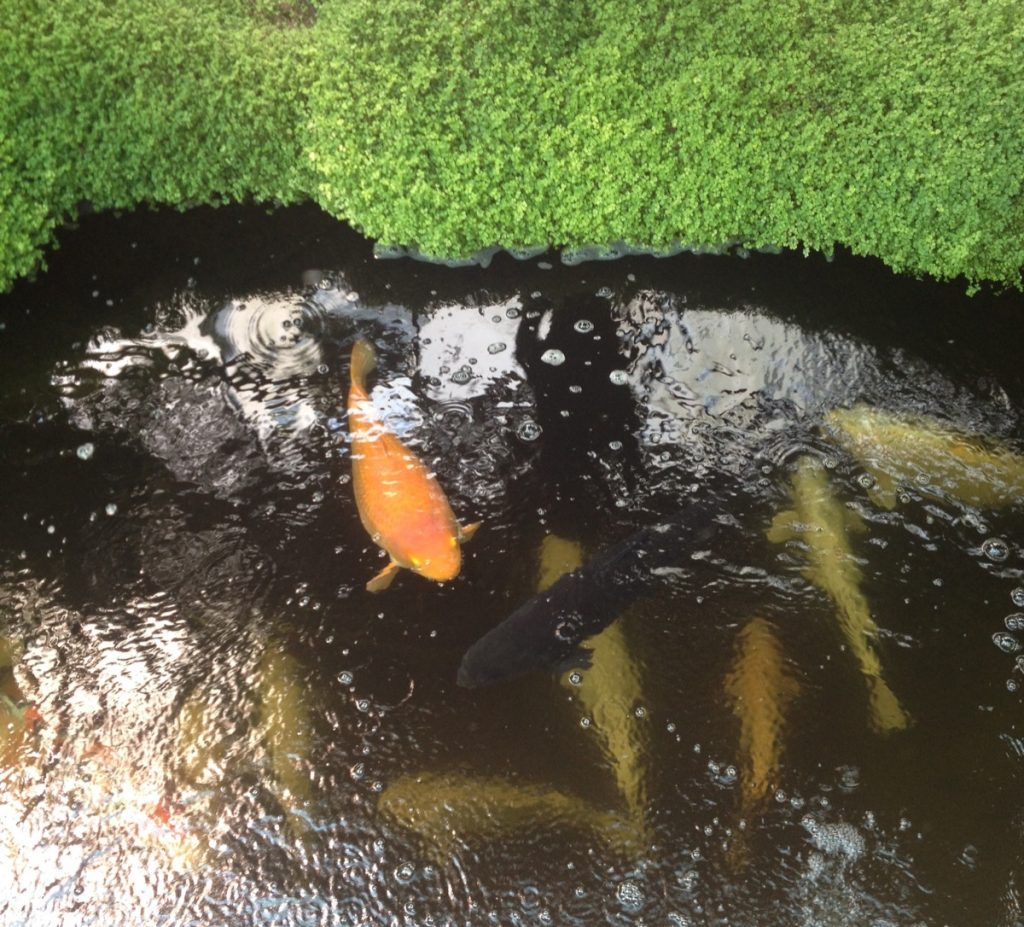 I had come with the vague idea of finding a specimen plant to fill a gap in a shady border near our deck. I wanted something large leafed and tropical looking but that would cope with staying outside all year, since I don’t have a greenhouse. I considered the cannas but they would need bringing indoors over winter, so they were out. In the end, I paid £19.99 for a gorgeous banana plant, musa basjoo. What a pleasing name! Musa basjoo!!! I could say that out loud all day. It’s about four foot tall at the moment, with three enormous, shiny mid-green leaves (one still furled). I love it. Because it was growing in a poly tunnel, I’m going to harden it off for a few days before planting it out. In other words, keep it outside during the day but indoors at night, so it can gradually adjust to colder, outdoor temperatures. Here it is, in the border where it will be planted. What do you think?

Musa basjoo is the hardiest variety of banana, so although it will need some special care, I should be able to keep it outside over winter. More on that in autumn… For now, here are some more weird and wonderful sights from The Urban Jungle.

PS. I also bought a pretty, blue-glazed, terracotta pan, as I was feeling inspired to plant up a mini succulent garden like the ones in the cafe, which I’ll write about in my next post.

Such a perfect balance between formality and infor

Purple accents from the Cotinus, Fagus and Dahlias

I dream of owning a walled garden some day 🥰 @h

Just back from a fabulous visit to @holmehalehallg

I was delighted to see that there is still so much

Perfect combination for autumn colour. This is Ver

Recent pics sent by my lovely clients. Swipe to se

Glorious sunshine in my garden today, and the Stip

Sensational dahlias, with a backdrop of Musa basjo

This garden always delivers, and there’s so much

Also on the drawing board today is this small city

#sketchview of a new #gardendesign which will be f

Mystery dahlia. Should have been ‘Purple Gem’.

New furniture has arrived in this courtyard garden

My rope pergola is finished. I planted two cream f

The plants are all in now, after lots of hard work